Though Thanksgiving is obviously not a holiday here in Iraq, my two new housemates and I left the office a little early so that we could cook a special Thanksgiving dinner.  We didn't have turkey but we did have two nicely stuffed chickens, mashed potatoes and gravy, green beans with almonds and apple crisp ala mode.  It was really delicious.  Actually, we could have bought a turkey that we saw in the market bazaar last weekend but none of us was up for killing and de-feathering a live bird.  I guess we are not true pilgrims!

Earlier on Thanksgiving Day I was one of three judges at a debate contest held between a team from the American University of Iraq in Sulaimaniya and the University of Kurdistan-Hawler (the Kurdish name for Erbil).  The topic was "Oil: a Curse or a Blessing?"  My co-judges were from the Ministry of Higher Education and the newspaper Awene.  It was so interesting hearing the viewpoints of those who live in a country with lots of oil and where, in fact, it can be both a curse and a blessing at the same time.  For example, in Kurdistan (as well as other oil-producing nations), the income from oil, if managed correctly, can be used to build hospitals, schools and much-needed infrastructure.  It can be used to fund legal aid and social services programs.  However, that's a big "if."  The money from oil, if mismanaged, can, among other things, also foster corruption and stifle entrepreneurship and industry.
Speaking of hospitals, one of the projects I would like to do in Iraq if we can get the funding is a program for burn victims.  The rate of suicide and attempted suicide by self-immolation is alarmingly high and growing (not to mention "forced suicides" -- a form of honor killing).  Women are most often the subjects and in many cases, they are victims of gender-based violence or suffer depression for other reasons.  I visited the burn unit of the hospital in Suly and saw a number of women who had been badly burned, not necessarily by accident.  One of the mental health workers from the TRTC (Trauma Rehabilitation and Training Center) who works at the burn unit on a volunteer basis gave two of my colleagues and me a tour and talked about the need for a psychiatrist on staff, medication to treat depression, and additional staff to provide mental health services.  A legal component could be included in the program to provide legal services for women who have attempted suicide because, for example, they are divorced and have no rights to visit their children (the situation of one woman we met in the burn unit).  We are going to write the proposal and hope that the funding will come. 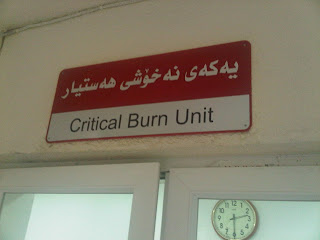 One of the victims in the intensive care wing of the burn unit was there because he had been injured in an explosion from a car bomb in Kirkuk.  Kirkuk is a disputed part of Iraq, with some claiming it is part of Kurdistan while others claim that it is not.  Because of this conflict, Kirkuk has seen a number of terrorist attacks.  Kirkuk is also an area rich in oil, and -- at least for now -- that oil is a curse and a major reason why people are fighting over who controls that city and region.
As is often the case with the Thanksgiving Day holiday, my housemates and I also feasted the day after (known in the United States as "black Friday).   Friends took us on a picnic in a beautiful area outside of Halabja.  The land belongs to one of our friend's grandfather who not only hosted us, but provided us with pomegranates from his trees (this is the season for that wonderful fruit and the best variety comes form Halabja).
After lunch we visited the memorial to the victims of the poisonous gas attack on the city of Halabja which was part of Saddam Hussein's genocide campaign against the Kurdish people.  We also visited the cemetery where many of the 6000 victims are buried in mass graves.  These are powerful reminders of the hideous acts human beings can commit against one another.
Both Thanksgiving Day and the day after were excellent opportunities for me to reflect once again about all I have to be thankful for -- the privilege of working in this country with its wonderful people, the hope that no one will ever have to experience another Halabja, the ability to experience fellowship with good friends, and immense gratitude for the abundance of other gifts I have been given.
Posted by Lynn Hiestand at 12:00 AM