It's been almost three months since I arrived in Sulaymaniyah and started working with Heartland Alliance for Human Needs & Human Rights.  Our Legal Help Desks in Suly and in Duhok have seen almost 700 people, conducted more than 200 legal consultations and have served, or are serving, as counsel in more than 50 cases.  It's been fascinating -- and often frustrating -- for me as an American lawyer to see what the laws and legal obstacles are in Iraq as well as what similarities are shared by both countries.


First, the definition of what constitutes a successful outcome may be different.  I asked our lawyers to tell me about some of their successful cases.  When I read these "success stories,"  a number of them involved divorce cases in which they were able to reunite a wife and husband, even though the marriage may have involved abuse.   I found this definition of success contradictory to what might be thought of as success in a similar situation in the US where the challenge is so often taking a woman out of an abusive situation, giving her a safe place to stay and helping her establish a life that does not include returning to what would almost surely be continued abuse.  When I asked why reunification in such a situation was a good outcome, I was told that even though a marriage might involve abuse, a woman most often was better off remaining married rather than being divorced.  This is because a divorced woman so often does not have the right to keep her children and even though she may not be able to get a job, she is not entitled to sufficient support from her ex-husband.  Under these circumstances, a woman has no choice but to return to her family, which may also be an abusive environment, and her family may simply try very quickly to marry her off again.

Many organizations have pointed out that the laws in Iraq institutionalize violence against women.  This arguably includes essentially forcing a woman to remain in an abusive marriage for fear of losing her children, being unable to support herself, returning to an unsympathetic family and/or being forced into a marriage which may be worse.  It is just one area where reform is needed.  And in too many cases involving adultery and similar issues, "virginity tests" -- which are much less reliable than polygraphs -- are found to be persuasive evidence.  However, the US and Iraq do share some things in common: as in so many countries, spousal abuse is far too common and elder abuse is on the rise (one of our clients is an 81-year old man whose son and wife beat him).
Second, there are laws which are foreign to an American practitioner.  One of our cases involves a law that criminalizes behavior that is difficult, if not impossible, to prove.  Of course, this gives the trial judge an inordinate amount of "flexibility" in deciding guilt or innocence.  As an example, we are representing a woman who has been charged with what is essentially encouraging the suicide of another.  She had a minor argument over housework with a sister-in-law who later burned herself to death.   Although Dr. Kevorkian and others have generated a lot of controversy over the issue of "assisted suicide," I don't think it was ever intended to cover this type of situation.


Unfortunately, as I pointed out above with spousal and elder abuse, there are also many similarities with legal situations in the United States.  One of our clients has been charged with stealing from his employer -- an employer who owes him salary.  Arguably, the employer believes that if he accuses the man of theft, he will drop his claim for salary owed to him and in any event, because our client is an illiterate Arab living and working in a Kurdish region, his employer may believe that he is without legal redress -- access to the justice system.  Luckily, one of our A2J lawyers will help change that outcome.
As in America, in order to try and successfully enforce your rights, you need -- or at least are far better off if you have -- a lawyer.  One example is a situation where a simple phone call from a Heartland Alliance lawyer produced significant results for a young woman from the Philippines who was brought to Sulaymaniyah with the promise of a job.  She had a three-year contract to work for a family who, as often is the case, took her passport.  She ran away from the family after she suffered sexual harassment and other forms of mistreatment.  She came to visit Heartland's Legal Help Desk and after contacting her former employer, we were able to retrieve her passport. She is now happily working for a hotel.
One of the things I love most about Kurdistan is the children I meet.  By and large, as in every country in which I've traveled, the children are the friendliest of all the people I encounter.  They are almost always ready with a smile, a "hello," a wave and are delighted to have their picture taken.  I should qualify this by the fact that most of the children I run into are boys.  As with women, girls are seen less often than boys, whether it is playing on the street or attending mosque.  (In fact, I'm told women generally attend only on Fridays and then only if the mosque is large enough to have a separate section for women.)
By and large, the activities and interests of children are universal -- hanging out, playing or watching football, or going to the market (mall?) -- whether in America or Iraq which, according to the UN, is transitioning from a conflict to a post-conflict country which still experiences violence too often. 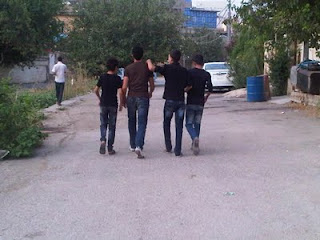 As I think I've mentioned previously, the Kurdish people are the largest ethnic group without a country of their own and, therefore, have invariably suffered at the hands of the governments of the countries in which they live: Iraq, Iran, Turkey and Syria.  Although Iraqi Kurds are now one of the most well off groups in Iraq since the war, they suffered horribly under Saddam Hussein, including being the victims of genocide.
Their Turkish and Iranian counterparts are not so lucky right now.  This last week has been filled with news stories about Turkey and Iran crossing their borders into Iraq to kill Turkish Kurds and Iranian Kurds, respectively, who live in the mountainous border regions.  There is a saying that one person's terrorist is another person's freedom fighter.  These mountain dwellers have been labeled as terrorist groups by many; however, for some, they are seen to be fighting for the freedom of their Kurdish countrymen who have been deprived of basic human rights, tortured and killed in their homelands -- Turkey and Iran -- where they have lived for thousands of years.  And is so often the case, innocent people have been killed in the conflict, including a farmer, his wife, his mother and children -- seven in all -- who were on the way to Erbil in their pick-up truck, having decided that their farm was too close to the area of conflict.  They were targeted and killed by a missile from a Turkish fighter helicopter.  In addition to losing their lives and being injured, these innocent victims are losing their property and their homes.   So even though Kurdistan largely avoided the series of coordinated suicide bombings by Al Qaeda in Mesopotamia from the prior week, the Kurds in Iraq are still the victims of violence as they have been for centuries.
Posted by Lynn Hiestand at 1:19 PM No comments:

The Contemplative Month of Ramadan

We have been back in the KRG, Iraq, going on two weeks now and are almost midway through Ramadan, which I understand ends at sunset on August 29. On August 30 Eid Al-Fitr begins -- a holiday to celebrate the end of Ramadan.  The entire community comes together for special prayers, visiting friends and family, and generally enjoying time together as they wish each other "Eid Mubarak" (Happy Eid).  You will not be surprised to learn that much of the celebration includes lots of eating and drinking.  But I'm getting ahead of myself.  Since arriving back on August 3 I've successfully fasted from food; I confess that I am drinking water to avoid dehydration during these August days when the temperature reaches 115-120 degrees  (and ok, I have a cup of coffee in the morning).  Like my neighbors, I await sunset when the fast ends and I enjoy the meal of the day.
Because days are spent without food or drink, as you can imagine, there is a much slower pace of life during this month.  Our office closes at 2:00 during Ramadan and the Access to Justice Project team has suspended our Mobile Legal Clinic outreach visits for the month.  Stores, markets and the like generally open mid to late afternoon; there are generally fewer cars and fewer pedestrians on the streets; and the chant of prayer is heard more frequently from the loudspeakers of the mosques.
I've noticed that women tend to dress more conservatively during Ramadan.  Many who do not normally wear headscarves during the rest of the year cover their heads and even wear more somber clothing -- but nothing compared to women in other parts of the Middle East.  I'm currently reading a book that was published in 2003 titled Reading Lolita in Tehran by Azar Nafisi, a previous bestseller.  One website summarizes the book as follows:

Every Thursday morning for two years in the Islamic Republic of Iran, Azar Nafisi, a bold and inspired teacher, secretly gathered seven of her most committed female students to read forbidden Western classics. Some came from conservative and religious families, others were progressive and secular; some had spent time in jail. They were shy and uncomfortable at first, unaccustomed to being asked to speak their minds, but soon they removed their veils and began to speak more freely — their stories intertwining with the novels they were reading by Jane Austen, F. Scott Fitzgerald, Henry James, and Vladimir Nabokov. As Islamic morality squads staged arbitrary raids in Tehran, as fundamentalists seized hold of the universities and a blind censor stifled artistic expression, the women in Nafisi’s living room spoke not only of the books they were reading but also about themselves, their dreams and disappointments.

Ms.Nafisi describes how the colors of the women's clothes under their black coverings -- vivid yellows, oranges, reds -- reflect the women's personalities.  Happily, Kurdistan is not Iran; there is a history of colorful dress here and, as I've mentioned before, blue jeans are de rigueur for young women in Suly.

Which is not to say that traditional values are not honored.  Each morning this week, breaking the otherwise quiet atmosphere, there have been traffic jams outside Heartland's office and I hear whoops and cries through my office window from the dozens of people, mostly men, gathered across the street.  When I asked some of our staff members what was going on, I was told that they were there to pick up the government entitlement for marriage -- the equivalent of about $5000 available to encourage marriage (and perhaps as well as a way to distribute government funds).
Posted by Lynn Hiestand at 12:40 PM No comments: