What the Eye Does Not See

﻿﻿﻿﻿﻿﻿﻿﻿﻿As I mentioned in my last post, one of the supplemental activities of the UNDP Access to Justice for Vulnerable Iraqis is a photo exhibition and media installation.  The photo exhibition, entitled What the Eye Does Not See:  The Faces of Vulnerability in Iraq, consists of  20 photographs  by various Iraqi photographers with captions highlighting human rights issues that the Access to Justice Project seeks to address.  The focus of the Exhibition is to (a) draw attention to and raise awareness of various issues, including gender based violence, trafficking, forced marriage, economic exploitation of children and other violations of human rights suffered in particular by vulnerable Iraqis, and (b) inform people about their rights under the Iraqi Constitution and other laws. 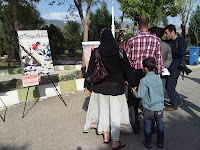 The media installation accompanying the photo exhibition is a closed circuit television playing public service announcements produced for the Access to Justice Project and other Heartland Alliance-Iraq programs.  Subjects of the PSAs include trafficking, forced marriages (which are now illegal), Zhn ba Zhn (one for one) marriages and various religious figures speaking out against violence against women. 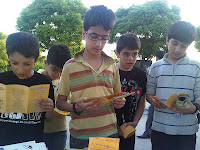 The first showing was held in Sulaimaniya's Azadi Park on a lovely sunny Friday, the traditional day for picnicking in Kurdistan.  The A2J Legal Help Desk lawyers and social worker were on hand to answer questions and to distribute brochures and pamphlets about various issues addressed by the UNDP Access  to Justice Project and other Heartland Alliance programs, including the institutionalized violence against women in Iraqi society. Children in particular were interested in reading about these issues -- a positive sign for change in future generations, which is critical for the advancement of human rights.  (An informal survey indicated that Haedar Umar's photograph below was the favorite of those viewing the show in |Azadi Park.)

The photo exhibition/media installation is now at the Investigations Courthouse in Erbil (through May 16).  The show was opened by representatives from UNDP and courthouse officials, including judges.  It will then be in the courthouse in Sulaimaniya and hopefully thereafter in the Duhok Courthouse. 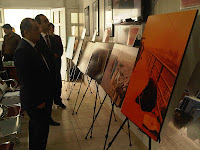 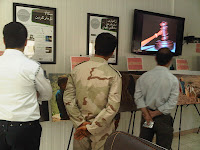 * * *
On April 25-26, the International Bar Association held the 5th World Women Lawyers' Conference in London, my former "home town."  Women attorneys -- and a few men -- from around the globe attended.  I was privileged to be a participant in the opening panel, Women in war zones: the role of women lawyers in areas of strife and reconstruction.   The session covered the role of women, and in particular, women lawyers, in the restoration of peace, and the reconstruction of social administrative structures and organizations in the implementation of the rule of law.

I discussed  the rule of law in Iraq, including the historical, cultural and religious context, the gains that have  been made and the continuing challenges to its implementation.  Fellow panelists included women from Zimbabwe and Nigeria, and an English lawyer who had worked in Afghanistan for a year on the implementation of the rule of law there.   The other speakers highlighted issues such as female genital mutilation and other forms of violence against women, the all too often deplorable conditions suffered by refugees and IDPs (internally displaced persons), illegal trafficking and other human rights abuses facing vulnerable populations.  Regrettably, these problems are not only prevalent in the countries  represented by the panelists -- Iraq, Afghanistan, Nigeria and Zimbabwe -- but throughout the world.

I continue to be amazed, saddened and angered by the inhumanity that exists, not only in post-conflict and "developing" countries, but also in those nations that are deemed to be "modern" and "developed."   But I am optimistic that by providing information about human rights to all persons, and helping people understand and enforce their rights, one can not only make a difference in the lives of those particular beneficiaries, but can help bring about change in the world, albeit slowly and often painfully.  This is what programs such as the UNDP Access to Justice Project and organizations such as Heartland Alliance seek to do.   If you would like to support the work of Heartland Alliance in Iraq or elsewhere, please consider making a donation on the Heartland Alliance website.
﻿

The Iraqi Constitution provides that the state will care for the handicapped and those with special needs and will ensure their rehabilitation in order to reintegrate them into society.  Kurdistan recently passed a  law protecting the disabled.